Original January 1944 map in sections of Kerkrade!!  Scale:  1:10,000  Any help matching photos found below to locations on map appreciated!!

From "Workhorse of the Western Front"

NOW  "Dragonteeth of the Siegfried Line"

NOW "Snipers being brought into Kaalheide from Kerkrade.  The only tram line was the Kaalheidersteenweg.  Tram is gone and bicyle path replaces it."

NOW  "Slagpile has changed alot in 62 years but it is the same hill.  It is now called the 'Skiberg' used by Snowworld (a indoor ski/snowboard company).

NOW  "Taken on top of the slagpile.  Mining installation in 'THEN' photo is gone.  Only the lake remains."

NOW "Holland-German border outside Kerkrade, Holland. "Nieuwstraat/Neustrasse" it has a Dutch and German name because the left side in Dutch and the right side is German. There was nothing to recognize on the photo anymore, but my grandpa and some family of him knew exactly were it was."

NOW "The evacuation of Kerkrade, people walking on the Wienweg.  The road has changed but the farm is almost the same!"

"An American Sherman tank driving through the Industriestraat in Kerkrade. The original photo has been taken on 17 September 1944. The building on the right used to be a farm I guess, and is now a pet store. Note the hook on the triangular roof, it is still there now."

"An American Sherman tank driving through the Industriestraat in Kerkrade. The original photo has been taken on 17 September 1944. The house with the Dutch flag hanging out, was a butcher, but doesn't exist anymore. Some local people helped me finding the exact place. The building on the background, is the same building as on the next photo."

"On 7 November 1944, Charles Dimmock's P-47 Thunderbolt got shot down by friendly fire. American troops must have mistaken him for a German fighter and opened fire. US files say he must have been killed by the bullets, because if he had been alive while he was crashing he would have tried to save the aircraft. He crashed in the Bockstraat, destroying 2 houses 38 and 40. That are the 2nd and 3rd building from the right on the new photo. A six year old girl from the Meijs family, sadly got killed as well. Charles Dimmock, the pilot, is buried at the Margraten American Military Cemetery in plot F, row 8, grave 20."

"This is a very nice photo, it shows an US GI posing with the local children. The sidewalks the artillery positions, proved to be very useful for stacking ammunition. This particular photo has been taken in October 1944, but the ammunition stacks by the road stayed in Kerkrade until February 1945."

Evacuation Kerkrade #1 & #2
This picture shows inhabitants of Kerkrade heading towards Simpelveld. These people were heading towards Heerlen, when they were ordered to go to Simpelveld through the Wienweg. The Wienweg is the road shown on this photo, and the same road as on the photo of Van Heely, only this pictture was taken from the other side. Note the MP and the motorbike on the right. Today the road is a bit wider, and there are no hedges at the right side anymore. The farm is still there, aswell as the gate on the left of the photo.

Evacuation Kerkrade2 #1 & #2
This picture has been taken in the Bleijerheidestraat on 25 September 1944. It has been taken from a building, so the NOW picture isn't exactly like it because we're standing in front of that building. In the back of the picture you can see people trying to carry their belongings in baby wagons. Note the beer-sign with "Brand Bieren" on it, it has been replaced with a modern sign of "Brand Bier", the building is still a cafe. 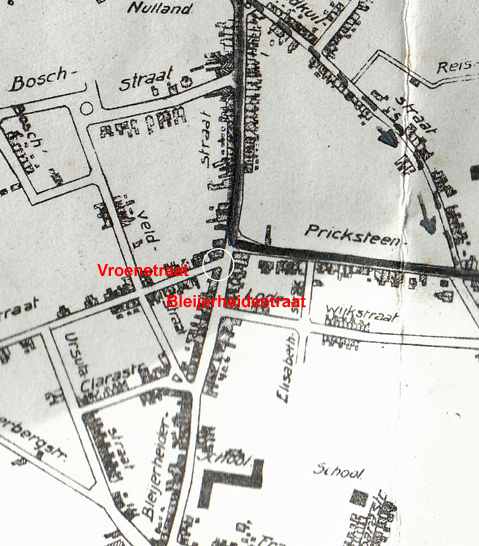 Dear sir,
Many thanks for your site. It remembers me a lot of my childhood.Your request in helping some picture to match them with the map I easily can help you with pictures Evacuation Kerkrade 2 #1 & #2 (Bleijerheidestraat 25) and the location on map KerkradeMap6. The location is depicted by the circle on the map (cut out from centre of KerkradeMap6). The picture was taken from the Bleijerheidestraat, the street left, round the corner is the Vroenstraat. Again thanks, kind regards and success with your further investigations ,

Evacuation Kerkrade3 #1 & #2
This photo has been taken from the same window as the previous picture, only to the left this time. I couldn't make the picture exactly like it, because there were some cars in front of the building so I had to stand in the middle of the road. The easiest way to recognize it, is with the white building that has 6 windows next to eachother. Again it shows people starting their evacuation. On the right some people transporting their belongings on a wagon with a horse in front of it.

Evacuation Kerkrade4 #1 & #2
This picture shows people out of the west of Kerkrade heading towards Valkenhuizen. The tram line doesn't exist anymore, it was still there in the time of my father, that is how I knew where the photo was taken. In the back you can see the old gasstation, you can see the Texaco sign. Note the 2 GI's in  the front of the picture.